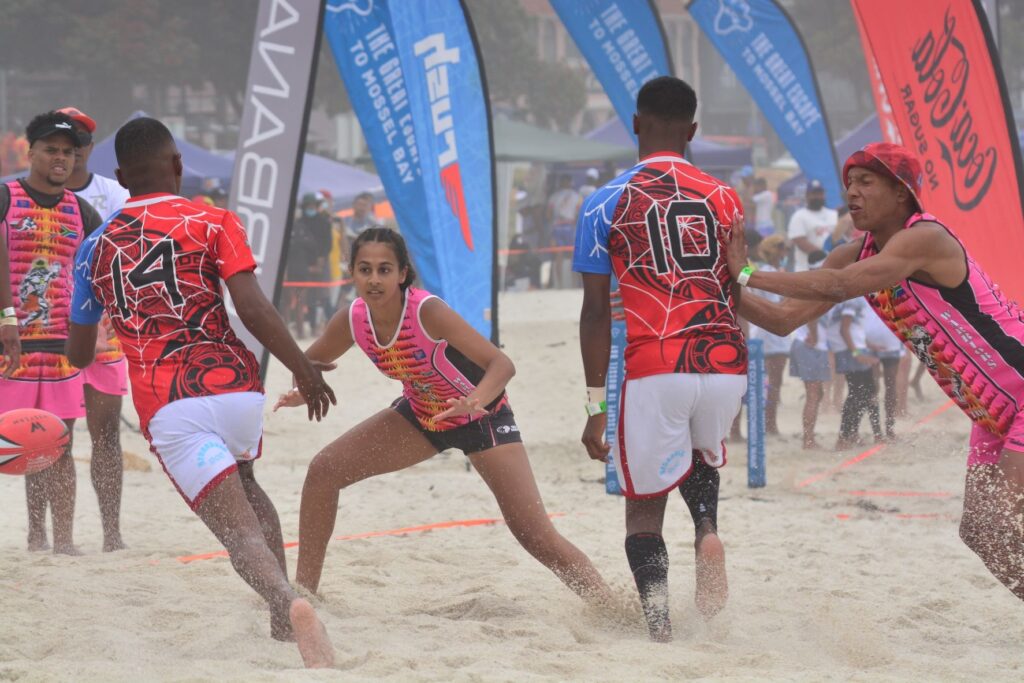 The Hot Summer of Touch (HSOT) has scored another season on the sunny south coast of the Western Cape with its 2021 series.

Kicking off last week in the Strand, this touch rugby series saw a remarkable game on Sunday, 12 December at Camps Bay, with players completely blindsided by the tides.

When organising a touch rugby tournament, especially one of this size, very little is left to chance. Three days before the big Camps Bay match, the resident surf crew and tournament MC, Deon Bing, accompanied the event organiser, Grahame Bobrow, on a recce of the beach to mark off the playing arena.

Arenas are chosen where tides won’t interfere with the play, and all Covid-19 protocols are put into place for the big day. Counting on Sunday’s 10:37am high tide, the flat sea and protective sand dune, there was scant cause for concern.

“We couldn’t have wished for a more perfect Mother City day – not a breath of wind, and overcast conditions throughout – perfect for players and spectators alike,” said Bobrow.

But players were in for a surprise. At around 9:15, shortly after the game had started, huge waves started breaching the bank and flooding the arena. “We couldn’t believe it when the first swell of the summer season coincided with our Camps Bay event. Eight-foot waves started rolling into the bay, literally crashing onto the field.”

This remarkable situation put a completely different spin on the game. “In a short time, three courts were overrun with seawater. Players were wading through water at almost waist level,” Bobrow said.

“This served as a major leveler, as teams with lots of pace couldn’t display their speed and it became a game of skill. The water slowed everyone down, but not one of the teams said they couldn’t play. Conditions were equal because they swapped sides halftime.”

Bobrow lauds these quality players for pulling out all the stops and for keeping up fitness levels throughout the two years of tough COVID-19 restrictions.

“If anything, people are keener to play with enhanced skills levels. It’s a true testament to the dedication of coaches and managers during downtime. Behind the scenes, our juniors receive a lot of support, we transport them to the field, and make sure they keep fit. We were so impressed by how they took on the challenge. Everyone involved deserves a shout out for their dedication to the development of the sport.”

For the Camps Bay game, 35 teams registered in this very controlled, well organised COVID-19-safe event, and HSOT commends the City of Cape Town for its support, as well as Mossel Bay Tourism for their beach presence during the game.

HSOT is now heading to Kleinmond on the 16th of December, Struisbaai on the 19th and, then as they say in the classics, all roads lead to the stomping grounds of the main sponsor – make your Great Escape to Mossel Bay on the 27th (Diaz Beach) and the 29th (Hartenbos) to see the final few teams go head-to-head.

Teams can enter online at www.touchrugby.co.za. If the day’s full contingent has not been filled, late entries may be permitted on the morning of each event (7:15 – 8:45am). Call or WhatsApp the HSOT Hotline on 062 770 6818 with queries.

Call 044 691 2202 or visit www.visitmosselbay.co.za to secure your Great Escape to Mossel Bay.