Mossel Bay is at the centre of some of the most significant archaeological discoveries ever made regarding the origins of modern humans, and has a strong archaeological Tourism product to support it.

Unlike other sites that can be remote, dry and downright inhospitable, the archaeological findings here are set against a stunning backdrop of seaside caves so cosy that generations of families sought shelter in them when almost everywhere else on earth was most likely uninhabitable.

Furthermore, as the sites you can visit in Mossel Bay form part of on-going excavation and advanced research projects, new discoveries are taking place all the time, and since one of the discoverers of the first site at Pinnacle Point in 1997 is a local archaeological tour guide, visitors may be among the first to hear about it.

The latest news (in March 2018) from the Mossel Bay sites is the discovery of microscopic shards of volcanic glass from a super-volcano eruption on Sumatra about 74000 years ago, about 9000km away. While the event was believed to have devastated Stone Age human populations around the world, indications at Pinnacle suggest the existence of a thriving community sheltered from the devastation.

Archaeologists Dr. Peter Nilssen and Jonathon Kaplan first identified Pinnacle Point’s historic significance during an environmental impact assessment in 1997 ahead of the construction of the Pinnacle Point golf estate and adjacent Garden Route Casino. Investigating seaside cliffs below the estate, they immediately recognised the value of the fossilised sediment piled high against the cave wall, which was later shown to contain a deluge of archaeological evidence, including the remains of stone artefacts, pieces of shell, charcoal from fires, pigment in the form of ochre, shards of bone and debris from the manufacture of tools.

The original cave is one of 54 heritage sites ranging from open shell middens to geological and cave sites, and represents one of the densest concentrations of Stone Age sites in the world. They were declared a Western Cape Provincial Heritage Site in 2012, an initial step in a bid towards gaining recognition as a UNESCO World Heritage Site. The Pinnacle Point caves have been the focus of intense scientific research by a multi-disciplinary team of more than 40 scientists from around the world, led by paleoanthropologist Curtis Marean of the Arizona State University’s Institute of Human Origins and Nelson Mandela University’s Centre for Coastal Palaeoscience in SA.

Known as the SACP4 Project – South African Coast Palaeoclimate, Palaeoenvironment, Palaeoecology and Palaeoanthropology Project – it is the largest scientific undertaking of its kind in the world, having so far received

more than US$15 million in funding from the United States’ National Science Foundation, the Hyde Family Trust and others.

Research has resulted in publication in prestigious international scientific journals such as Nature and Science.

The Pinnacle Point sites are at the centre of the archeologically rich Cape south coast, a 600km stretch of coast from Langebaan (west of Cape Town) to Robberg (Plettenberg Bay), and are archaeologically important for at least two significant reasons: They changed the way scientists contemplated the origins of ‘modern’ humans (homo sapiens) and they hold a unique record of the climate from about 400 000 to 30 000 years ago.

Until very recently it was believed ‘modern human behaviour’ – such as the making of composite tools with intricate stone blades and points, which represent major development in mental capacity – first appeared in Europe about 50 000 years ago. Evidence at Pinnacle proves such behaviour dates back as far as 160 000 years or more.

There is also early evidence of art and symbolic behaviour, stone tool heat treatment, micro lithic technology (sharpened stones for arrows) and the first systematic use of seafood in the human diet.

In addition, inferences on the palaeoclimate and palaeolandscape suggest a unique set of environmental circumstances – including ocean currents, a broad continental shelf and sweeping plain, and vegetation supported by the geological substrate –that may have been conducive to the survival of coastal Pleistocene (Ice Age) hominine communities.

As an archaeological tourism destination, Mossel Bay is everything a serious archaeotourist wants: it is archaeologically very significant; it is set against spectacular scenery; has year-round good weather; is easily accessible; and is situated in one of South Africa’s most popular tourist areas, the Garden Route.

This four-hour tour with one of the Pinnacle Point discoverers, archaeologist Dr. Peter Nilssen, includes an absorbing lecture and concludes with a guided tour down a series of steep wooden stairs and boardwalks to Cave PP13B where it all began. A shorter 90-minute version, called Cave Visits, with an archaeologically trained local nature guide is available daily on demand. www.humanorigin.co.za

Not as pristine, but quickly and easily accessible from The Point parking lot, the Cape St Blaize Cave is scientifically compromised but remains significant as South Africa’s earliest archaeological excavations (1899) and has revealed middens laid down by hunter-gatherers, the San and Khoekhoen people over a period of nearly 200 000 years.

It is also a popular spot for whale and dolphin watching, and is situated below the St Blaize lighthouse, in itself an interesting historical landmark and tourist attraction.

Opening later in 2018, the Point Discovery Centre will be a multi-purpose research, display, entertainment and education building at The Point at Cape St Blaize, where the Pinnacle Point and related studies will be placed into context by considering the past, observing the present and pondering the future. 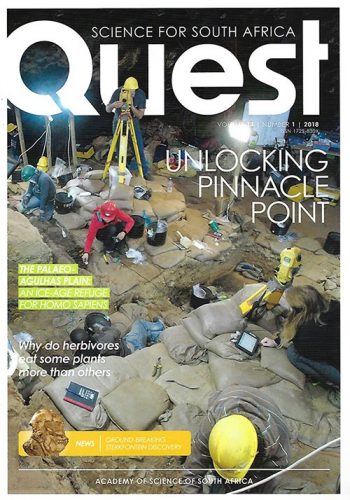