Do you know Mossel Bay`s Point?

The Point is located at the tip of a Peninsula that forms part of the historical part of Mossel Bay`s town. A popular spot for locals and visitors with restaurants, monument, tidal pools, historic cave, aquarium, zipline and more! 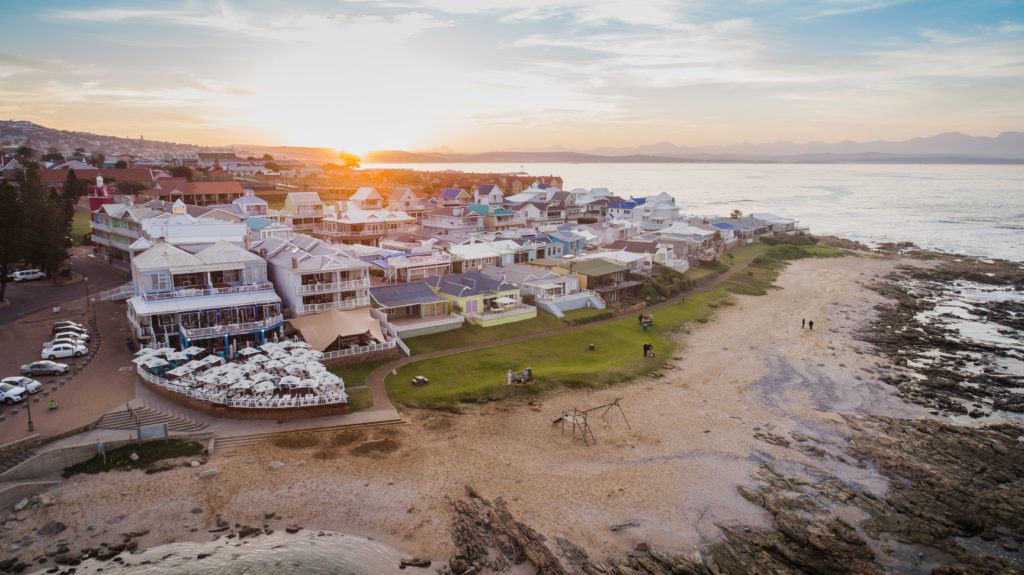 Die Poort, situated at The Point is possibly the finest natural bathing pool of its kind in the world and is formed by two large reefs set wide apart, forming a long inlet. Seldom is such breath-taking scenic beauty encountered as at this world-famous natural tidal bath. For generations, the town’s children have learned to swim in this tidal pool where chains and ropes have been secured to assist swimmers when the surging high tides cause strong currents to wash down the alley The pool has a smooth sandy bottom and the water of the Indian Ocean is mild, perfect for almost year-round bathing. It is deep enough for diving except at low tide. Swimming in the Poort’s live water, protected from the open ocean by the walls of rock with breakers thundering a stones’ throw away and showers of spray leaping in the air within sight is a rare sensation only to be experienced on a holiday in Mossel Bay.

Die Poort housed a tearoom frequented by locals and travellers as well as an open-air dance floor where the youngsters used to spend many jolly summer nights. Many diving and swimming competitions were hosted during the summer holidays. 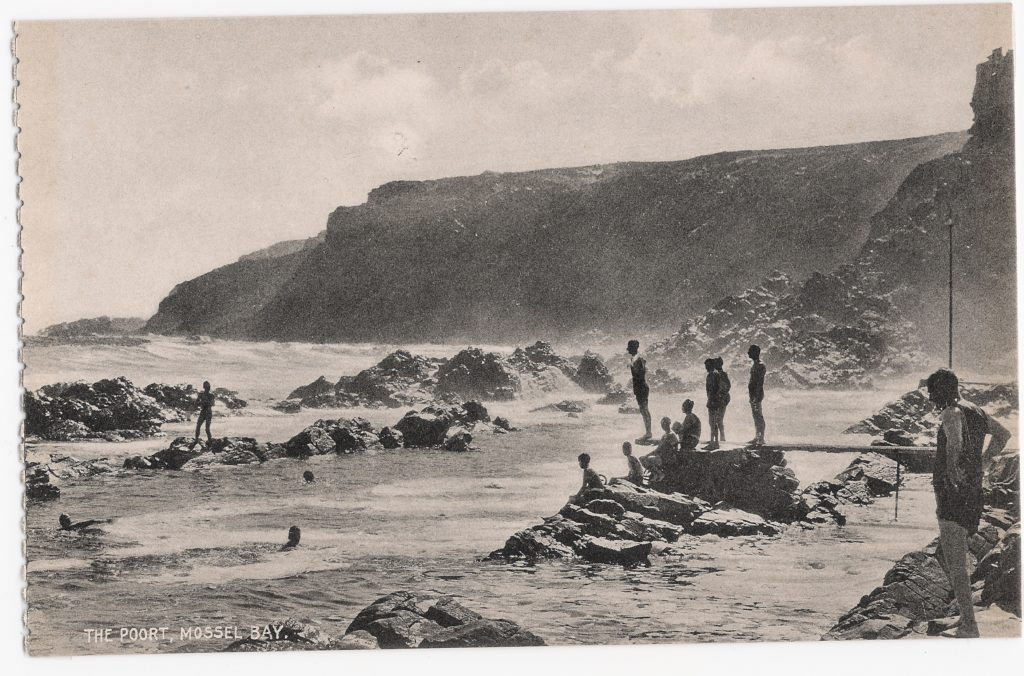 The Cape St Blaize Lighthouse is situated on a promontory of solid rock, that projects into the Indian Ocean and shapes the Bay. It towers over the Point area and is the gatekeeper of Die Poort.

In 1860, neither the British nor the Colonial government were prepared to fund the construction of a much-needed lighthouse. The Mossel Bay Boating Company levied a harbour tax to raise the required funds to erect the Lighthouse.

The Lighthouse, with a tower of 20.5 m was built of stone of excellent quality found in the quarry on-site, during 1863. The stationary light commissioned in March 1864 was visible for 15 seas miles. In 1897 a revolving light, visible for 22 sea miles, was installed and remains in use to this day. Cape St Blaize Lighthouse was the last manned lighthouse along the South African coast. Until the late 1970s, a clockwork system was originally used to turn the lens and it required a lightkeeper to climb up the tower and wind it up every three hours! All the navigational aids and joining plants are fully automated now, but lightkeepers are still employed. A constant radio watch is kept and the regular meteorological duties are also undertaken. 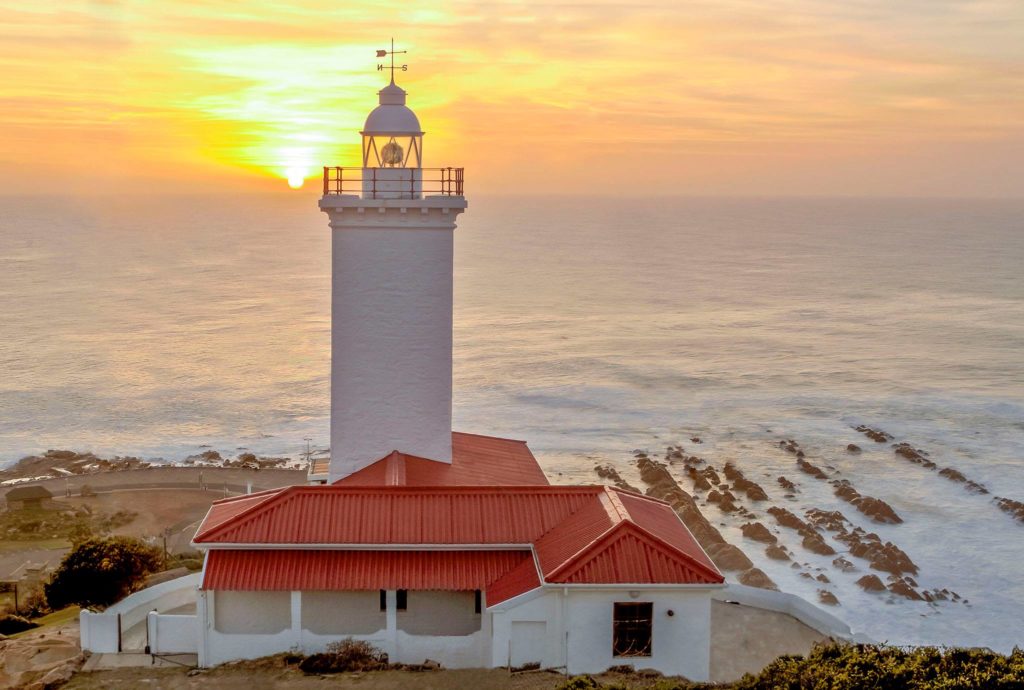 A cave carved in a cliff under the lighthouse, which was once home to Khoikhoi hunter-gatherers, exhibits some interesting historical facts and fossils found in the area.

Mossel Bay is at the center of some of the most significant archaeological discoveries ever made regarding the origins of modern humans and has a strong archaeological tourism product to support it.

Unlike other sites that can be remote, dry, and downright inhospitable, the archaeological findings here are set against a stunning backdrop of seaside caves so cozy that generations of families sought shelter in them when almost everywhere else on earth was most likely inhabitable.

The Pinnacle Point sites are at the center of the archeologically rich Cape south coast, a 600km stretch of coast from Langebaan (west of Cape Town) to Robberg (Plettenberg Bay), and are archaeologically important for at least two significant reasons: They changed the way scientists contemplated the origins of ‘modern’ humans (homo sapiens) and they hold a unique record of the climate from about 400 000 to 30 000 years ago.

Until very recently it was believed ‘modern human behavior’ – such as the making of composite tools with intricate stone blades and points, which represent a major development in mental capacity – first appeared in Europe about 50 000 years ago. Evidence at Pinnacle proves such behavior dates back as far as 160 000 years.

There is also early evidence of art and jewelry, stone tool heat treatment, microlithic technology (sharpened stones for bows and spears), and the first systematic use of seafood in the human diet. 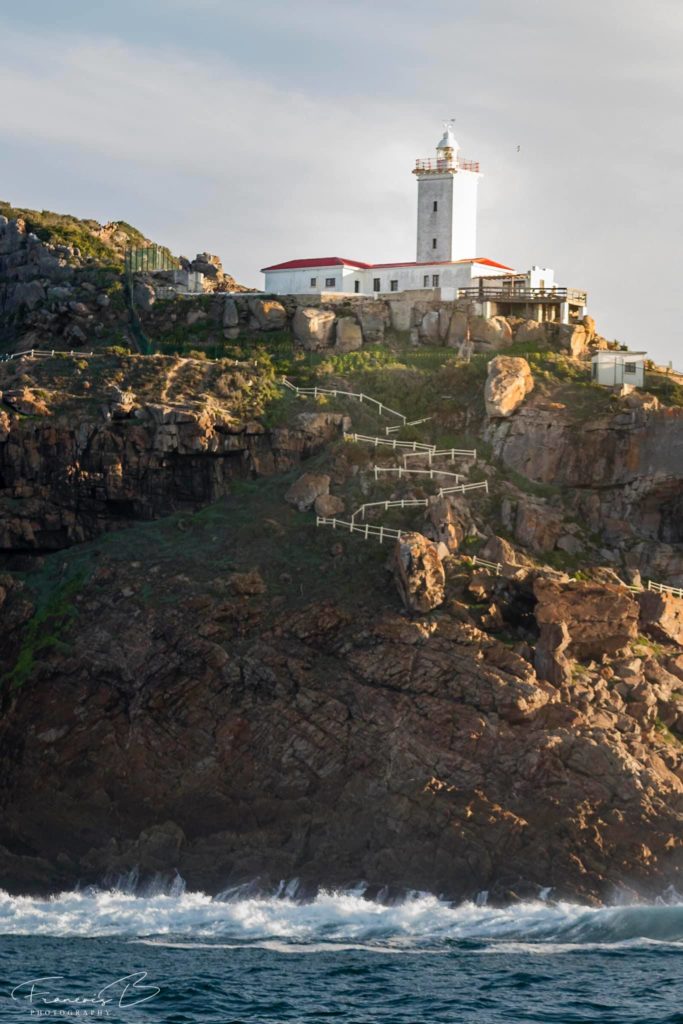 Built around 1920 to commemorate the townsfolk who lost their lives in the First World War. Later a panel was added with names of those killed in action in World War II. The Mossel Bay War Memorial is situated alongside the Point Hotel. The idea for the monument was spearheaded by the Moth Veteran Organisation to commemorate all those from Mossel Bay who laid down their lives defending their country in the 1st and 2nd World War, the Korean War and all the soldiers who guarded our borders. The names of these soldiers have been set over a map of Africa, upon which a line has been drawn in crimson mosaic, marking the places of birth and death of those whom the memorial commemorates. It was designed by W.J. Delbridge who was an old Mossel Bay boy who kindly volunteered his services. All funds for the monument were raised by the Mossel Bay community through Public Subscription and various functions. The monument is built on Frog Rock, so-called because of the shape of the rock. It was a favorite play area for the young boys of the Mossel Bay at the time. The unveiling took place on Sunday, 28 th September 1924 by Major General Sir H.T. Lukin and was dedicated and consecrated by the Bishop of George. In 1954 the names of the casualties of the 1939 to 1945 conflict were added on a marble plaque.

The St. Blaize Trail is a popular 13.5 km (6 hour) hike that follows the 30 meter contour along the cliffs westwards from the Cape St. Blaize Lighthouse. It begins at the cave below the Lighthouse, and ends at Dana Bay (you can walk it in either direction), and is marked with the sign of the Oystercatcher. Parking is available at both the St. Blaize Cave and Dana Bay.

Tidal Pool in front of Delfino`s

Follow the path from Delfino`s round the Point for breathtaking views and swimming holes and collecting shells during low tides.

Enjoy the jungle gym opposite Big Blue and the Zipline

An outdoor gym is situated just below the Zipline`s arrival platform, to the right of the Ice Cream Shop

Point to Point Guided Hike with Point of Human Origin