Mossel Bay’s history is unique and was pivotal to the development of the rest of South Africa.
The first economic transaction in South Africa took place here along with several other “firsts” that changed the history of South Africa … forever

A timeline of Mossel Bay`s History

1488    3 Feb, Bartolomeu Dias fleet, two vessels, arrives on names day of Saint Blaize. At the landing site, the seafarers found a stream of fresh water.  A skirmish with the Khoi took place, resulting in a cross bow being fired.

1497   Vasco da Gama arrived on 25 November, as their second expedition to the East.  Names the Bay, Aquada de Sao Bras.   They encountered friendly Khoi, traded an ox for a red cap and some bracelets. This was the first trading transaction on Southern African soil in which explorers took part. The First people entertained these visitors with music from their reed flutes, and the sailors danced. These reed instruments had 3 notes only, and the tune was carefully recorded by Da Gama. Vasco Da Gama set up a padrao/stone cross and a wooden cross on the ‘high southernmost point’, which unfortunately were destroyed by the Khoi right after. Similar crosses were erected at Kwaaihoek and Namibia.

1500   Pedro d`Ataide, Captain in Fleet of Pedro Cabral, on a return trip, leaves a letter in a boot in a tree near the watering place.  The letter warned of antagonism towards Portuguese in Calcutta, advising explorers to go to Malakat.

1501   July,  Jaco da Nova en route to India, finds the letter anof d’Ataided in thanksgiving  of being warned of danger, erected a small chapel, an Ermina, on a high spot.

1595   Cornelius Houtman, the first Dutch seafarer to sail to India via the Cape called.  Traded goods for a few sheep.   Houtman drew the first map of the Bay, mentions the fresh water, and a big tree.

1601   Named  Mosselbaai by Admiral P van Caerden  as he found only Mussels to eat.

1652   Jan van Riebeech arrived at the Table Bay to establish a garrison for the VOC.

1729   The first “Leenplaas” (Hagelkraal) was awarded. From this time onwards more farming communities settled in the district.

The Garrison consisted of an officer, Hans Abue and six soldiers, tasked to prevent the French from claiming the land.

1786/7  The Granary erected. The then Governor of the Cape, Cornelius Jacob van der Graaff, encouraged the cultivation of grain in the district and hinterland.  The Granary was erected for grain to be stored here before being shipped to Cape Town.

1788, In July, the first shipload of wheat was sent from Mossel Bay to Batavia on the vessel Johanna Jacoba.

That also was the start of the shipping activities of Mossel Bay.

1798   Jan John Barrow recorded an ‘abundance of fish of all varieties, the mussels had a string taste, but the oysters were of the best quality.’

1811   Mossel Bay resorted under the jurisdiction of the District of George. 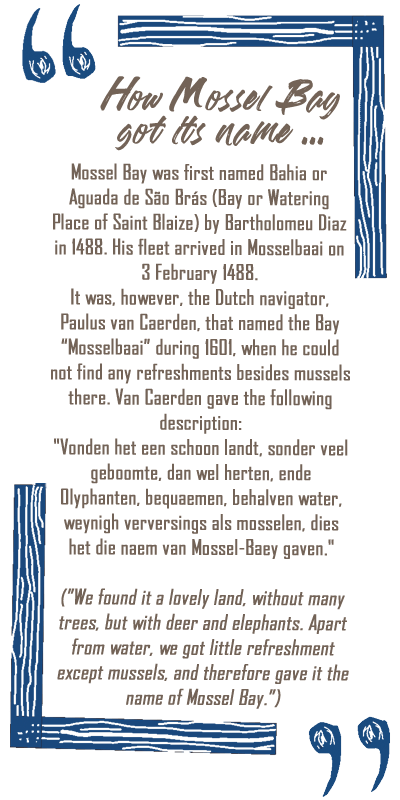 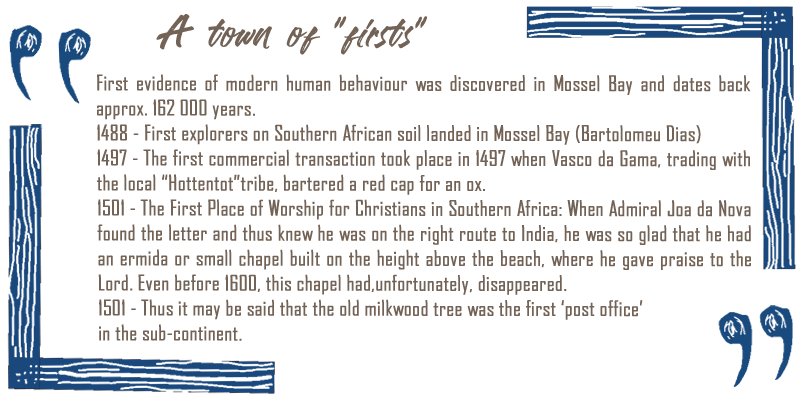 Local museums that are well worth a visit ...

A Museum of The Great Trek

The place where cultures meet