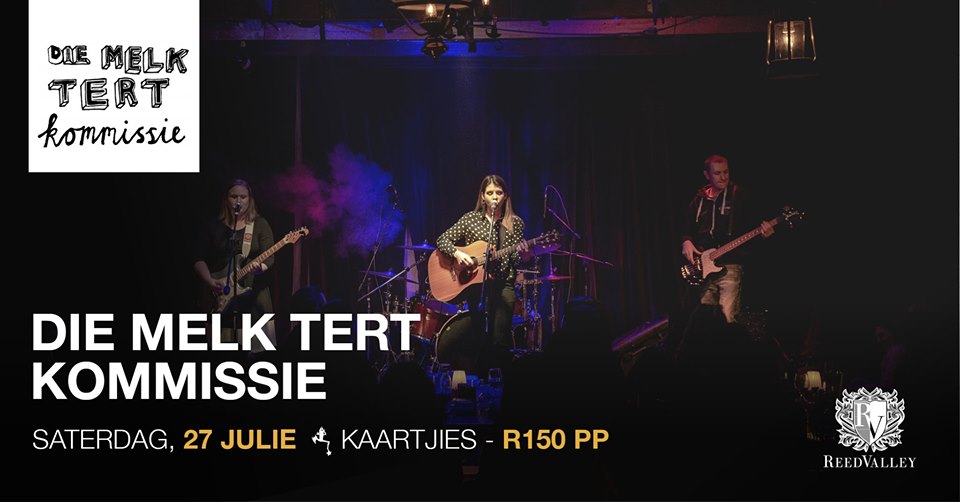 After a very long absence from the stage, Die Melktert Kommisse decided to take their feet on the stage again!

The Melktert Commission is a 4-piece Afrikaans rock band, originally from Jeffeys Bay and consists of Lucinda Rosa Neethling (Lead vocals and acoustic guitar), Jean Marie Korff (Electric guitar and backing vocals), Tim van der Westhuizen (Bass guitar) and Jan-Adriaan Korff (Drums and backing vocals). The band met in 2002 for the first Rockspaaider competition they won. Their first CD “Volroom” was recorded in June 2003 and released later that year. In April 2005, they decided to take up “The Melktert Commission” as a profession and to tour and market full-time and even went to London. There were two music videos made from tracks on the album namely: Teen and Sticks and Stones.

The second album, “Wonderwoorde” was recorded in November 2005 and released early in 2006. The reception of the new album was very good by the public as well as the media. They tore the country and had record sales. Three music videos of clips on the album followed: Here I am, My Angel and Proudly South African.

Nominations for Wonder Words release include a Kanna nomination for their “Wonder Words” production at KKNK and at the MK Awards for Best Rock Group. In mid-2007, Die Melktert Commission recorded their third album “Vergewe en Vergeet”. Two music videos Mr Jealousy and Pronk were made from the album. The track Pronk was also used on the soundtrack for the Afrikaans film, “Bakgat!”.

At the end of 2009, DMK began to scale down their performances before announcing that the group was going to take a break. Three of the members are currently living in Cape Town while one is still living in the Jacaranda city.