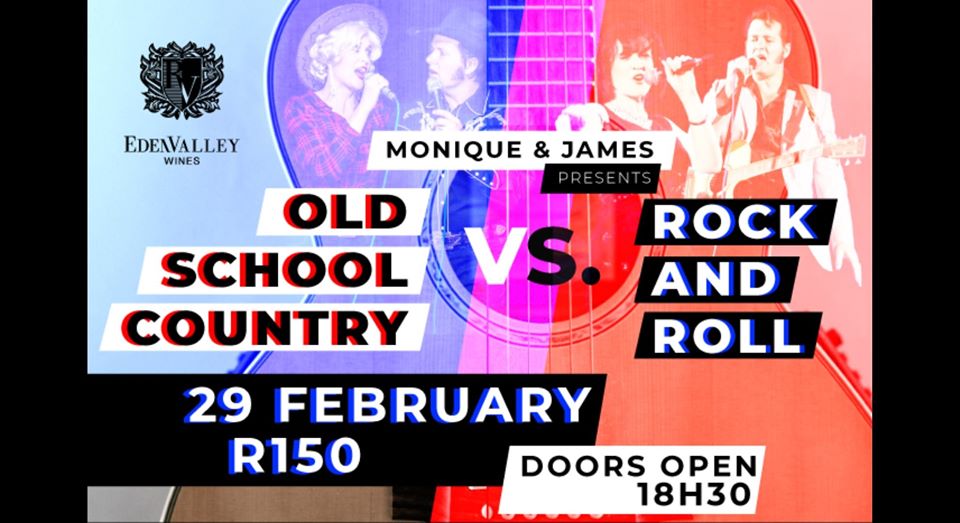 James and Monique presents a tribute to Country & Rock & Roll legends at Reed Valley this February – join us for an evening filled with great music, food & wine!

Sitting with friends? Remember to let us know – events@reedvalley.com

James Marais and Monique Cassells are renowned for their “Oldies But Goldies” show, which has brought them sold-out attendances whenever they have performed at ReedValley. In 2017, they successfully launched their “Old School Country Legends” tribute, which was also a hit at ReedValley.

They have now devised the “Old School Country vs Rock ‘n’ Roll” show, which consists of the best of their “Old School Country Legends” show, paying tribute to some of the Country legends from the ‘50s to the ‘80s, as well as some great rock ‘n’ roll/oldies hits from their “Oldies But Goldies” collection. Some of the music featured is by country artists such as Johnny Cash, Patsy Cline, Dolly Parton and Don Williams, as well as legends from the rock ‘n’ roll era such as Elvis Presley, the Beatles, Buddy Holly, the Everly Brothers, Roy Orbison, Creedence Clearwater Revival and many more. The show is a mini-theatrical experience, featuring the dynamic vocal and visual performances of James and Monique, alternating as a duo and individual performers, who also do multiple costume changes throughout.

James is the no. 1 Elvis Presley tribute artist in the country, and has appeared on television several times, including appearances on SABC 2’s game shows, “Noot Vir Noot” and “Musiek Roulette”, as well as Kyknet’s “Jou Show”, presented by Emo Adams.

Monique is a very accomplished vocalist, having performed many different genres of music over the years, including rock ‘n roll, rock, pop, country, blues, ballads and even light classical. She made her television debut on SABC 2’s “Musiek Roulette” in May 2018.

James and Monique are a powerful duo and perform some of the best Beatles and Everly Brothers duets you are likely to hear. They also put their own stamp on some well-known hits not previously performed as a duet.