Commissioner Joseph Vintcent, who performed the role of Town Clerk when Mossel Bay was established officially as a town in 1856. His annual remuneration was 15 pounds. He came to South Africa from Holland in about 1839. He went into business with Mr. John S. Prince and they imported cement and sugar, transported by oxwagon as far afield as Kimberley. Prince & Vintcent  also became exporters of ostrich feathers to the value of millions of pounds when the great ostrich feather boom hit its peak circa 1880. The company had a presence virtually all over the Little Karoo and the Garden Route up to approximately two decades ago. The Prince Vintcent building on the corner of Bland Street and Church Street serves as a reminder of Joseph Vintcent’s legacy in Mossel Bay. 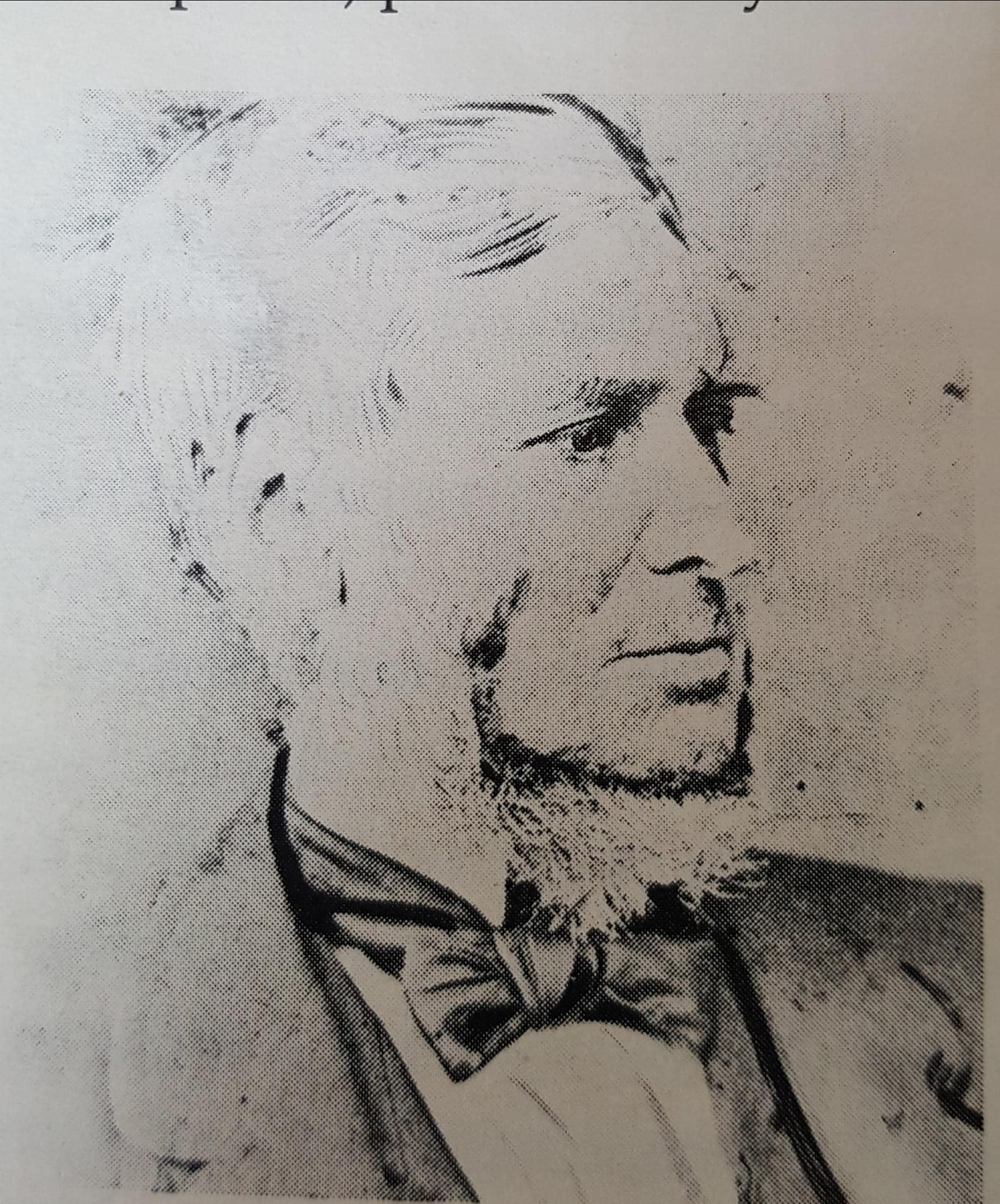 Alwyn Ignatius Vintcent (1862– 1918) was one of the most prominent members of the Vintcent family that played such a leading role in the Mossel Bay community for more than a century and a half. He is also the name behind the legendary old tugboat (second image) which served the Mossel Bay harbour from 1959 to 1983. Described as a dynamic and genial person, strong of character and with a fine sense of humour, Alwyn lead the family business, Prince Vintcent & Company, during the economic boom period in the late 1800’s until the early 1900’s. The business was an economic powerhouse in Mossel Bay as well as further afield in the Southern Cape and the Little Karoo. Alwyn served as Mayor of Mossel Bay from 1899 to circa 1910. During his term of office, he campaigned, inter alia, for the establishment of a new hospital in Mossel Bay. The hospital, on the site of present municipal offices at 101 Marsh Street, was opened on October 5, 1905. It was also during his term of office that the George-Mossel Bay railway line was opened officially in 1907. Alwyn was elected to the Cape Legislative Assembly in 1910, becoming the third member of the Vintcent family after his grandfather, Joseph Vintcent (1809-1873, born in Holland) and his father Louis (Lewis) Vintcent* (1836 -1893) to hold this office. He was also the chairman of the board of the Mossel Bay Boating Company, a private company which managed the Mossel Bay harbour from 1896 until 1916 when it was taken over by the authorities. He was lost at sea on 4 October 1918 (third image, old Mossel Bay cemetery) when the Japanese ship, the Hirano Maru, on which he was returning from a visit in England to his son Howard Nelles was torpedoed by a German submarine. Howard Nelles was serving in the British Army at the time. The Alwyn Vintcent was South Africa’s last steam-powered tugboat and is now on display in a private collection at Villiersdorp. 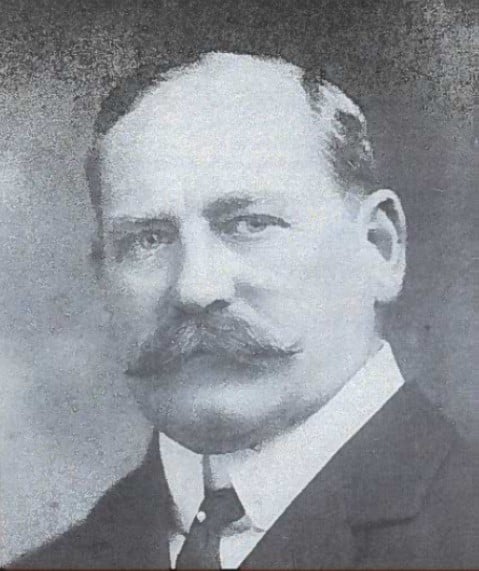 * Both names are used In “The Vintcents of Mossel Bay.”

The second Dutch Reformed church building, which became known popularly as the Klipkerk (Stone Church), in Church Street is still one of Mossel Bay most prominent historic stone buildings. The first photo below shows the building c 1892-1898. The second image shows the building post 1898. The cornerstone of the building was laid in 1878 by the Reverend T J van der Riet (refer to previous post) and it was consecrated in 1880 by his successor, Reverend I G J Horak (separate post to follow) on 14 February 1880. It will be noted that the steeple looks different on the two images. The clock visible in the steeple on the first image was installed in 1892, but the steeple became unsafe because of the weight of the clock. It had to be demolished and rebuilt. The new steeple (second image) was consecrated on 24 September 1898. The original building, together with a new organ and benches, cost ₤7280. Services were held in English as well and the English-speaking members of the congregation contributed handsomely to the cost of the building. The congregation also raised funds through, inter alia, “zitplaatsgelden” (third image), an annual fee for reserved seating in the church. The stone for the building was donated by the Municipality. The architects were W B Hayes and Carl Otto Hager and it was built by the local building contractors Michie and McGregor. The fourth image shows the present church, which was built c 1949. This resulted in the unique situation that there were three churches of the same denomination on the same property simultaneously. – 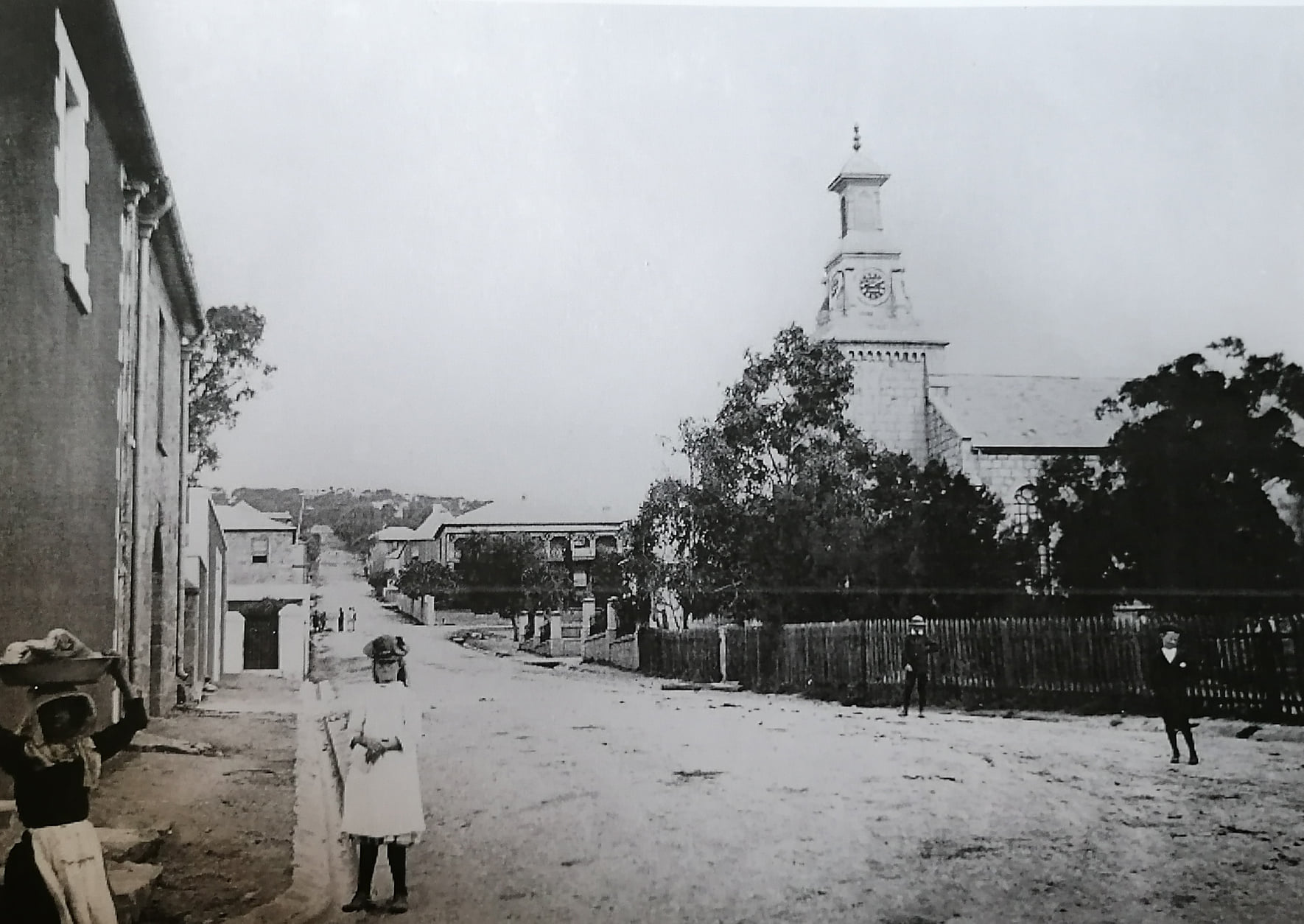 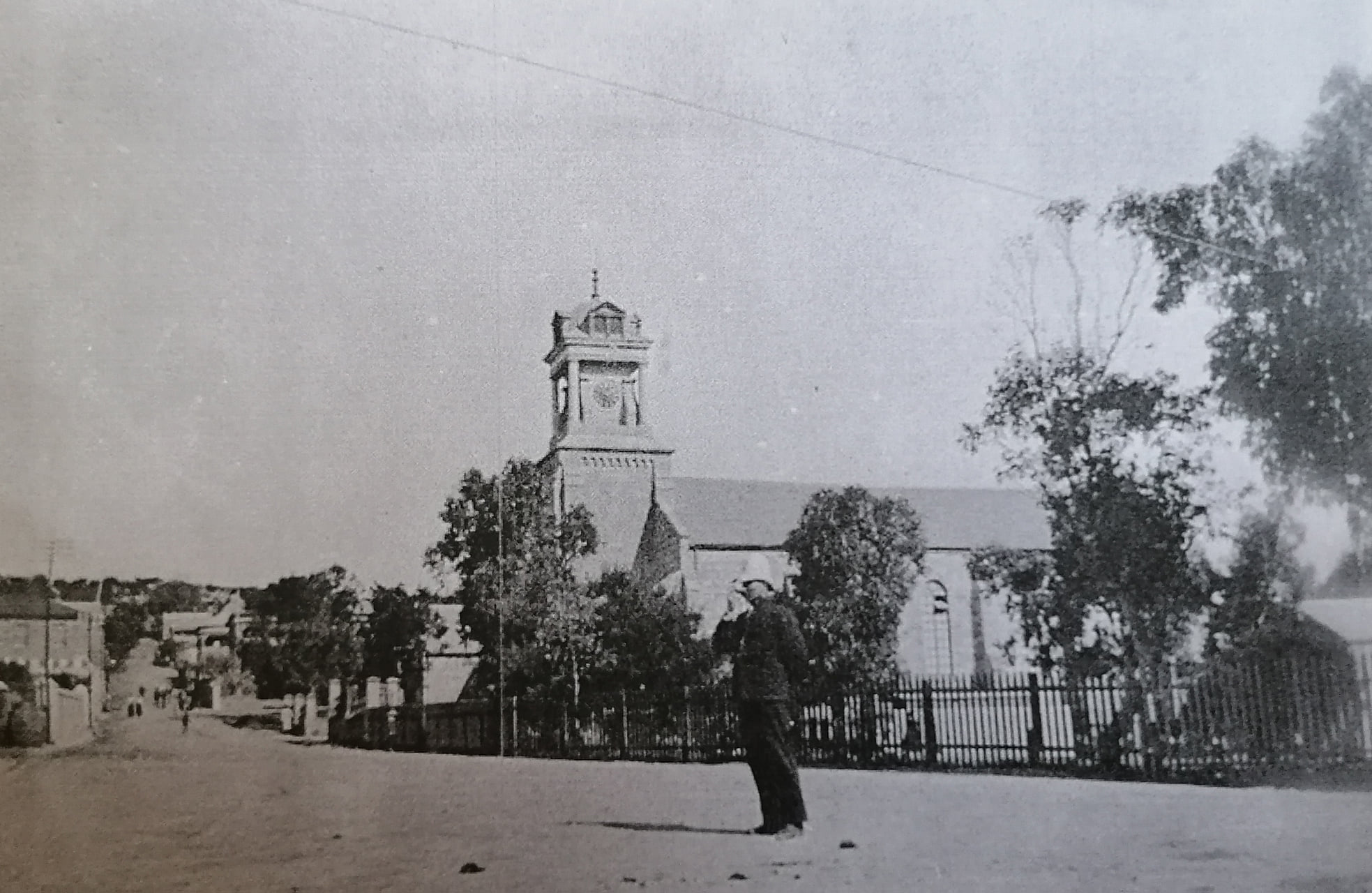 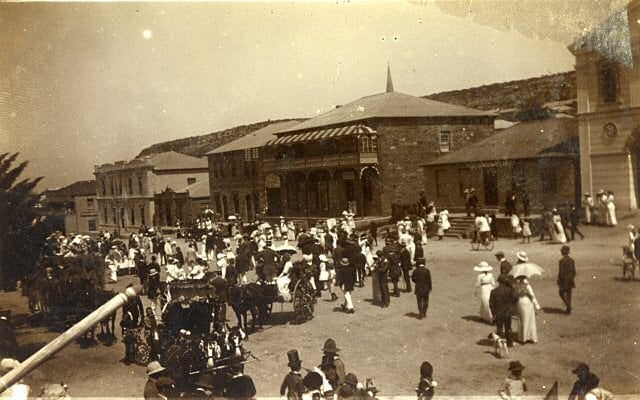 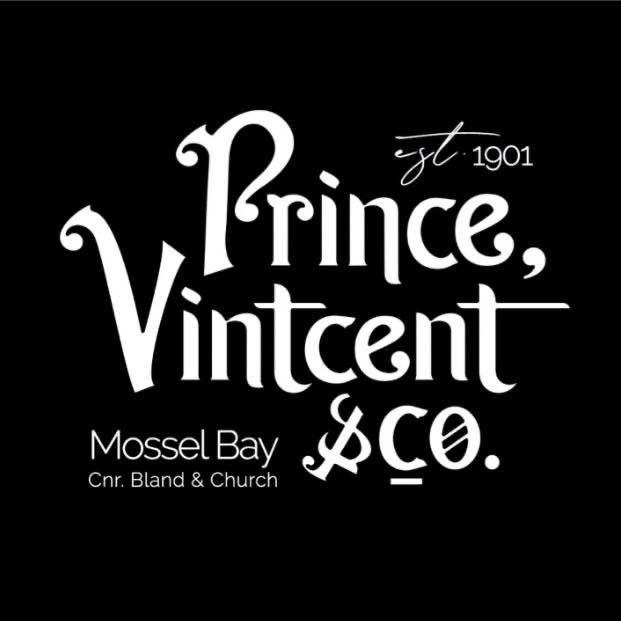 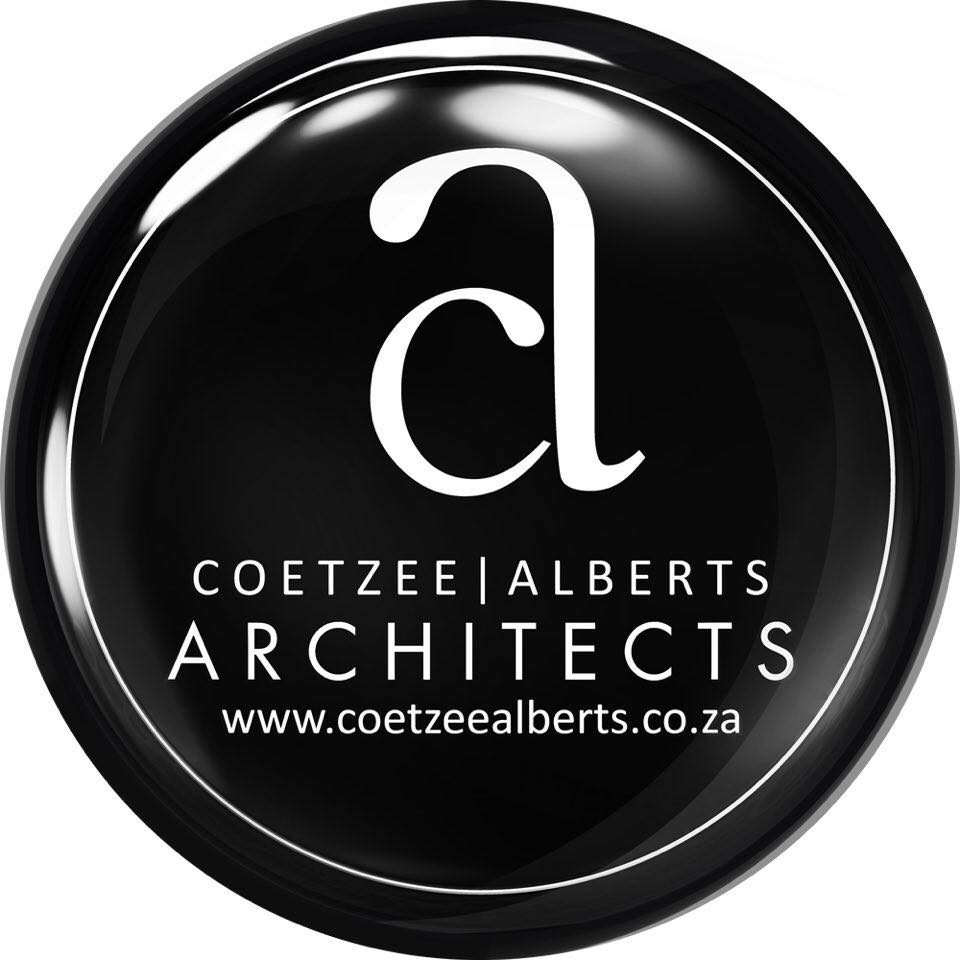 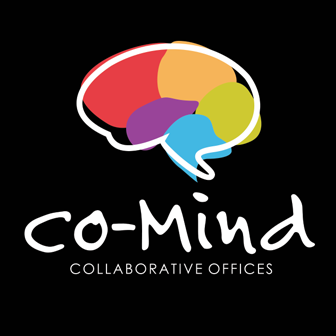 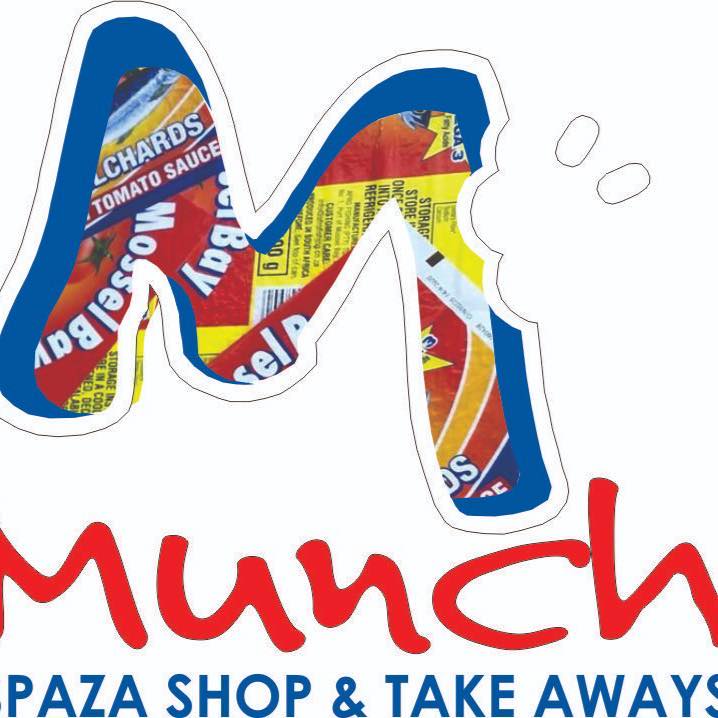 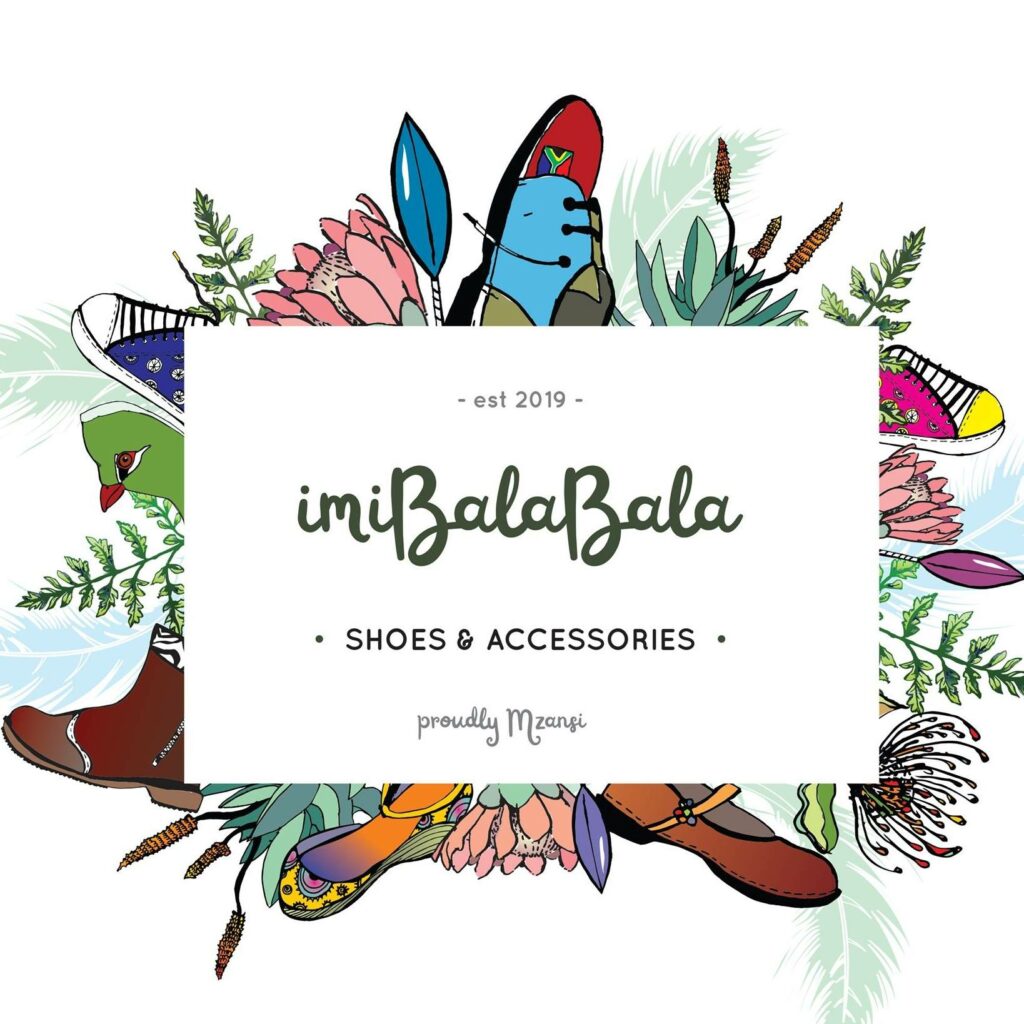 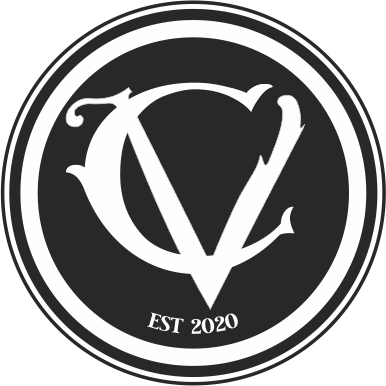 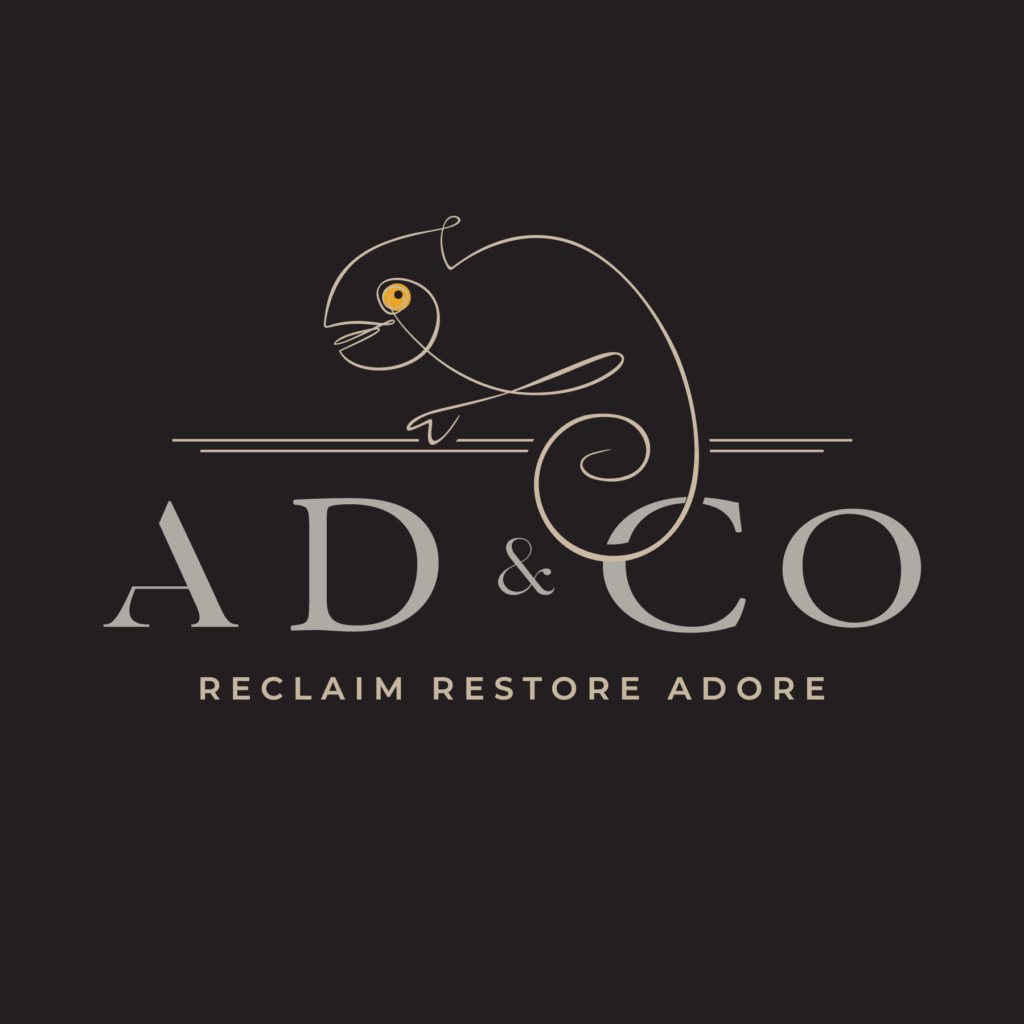 Divine, Hall & Company (1873 – 1896) (first image*) on the corner of Bland Street and Church Street, which was initially called the Old Corner or “Den Ouden Hoek.” Because of the renaming of a section of Bland Street west of Church Street in the 1990’s, it is now the corner of George Road and Church Street. Divine, Hall & Company was founded by H J Devine and WA Hall who arrived in Mossel Bay in 1873. Their “fashionable clothing, linen, drapery and haberdashery establishment” opened in July 1873. It was the first store of its kind in Mossel Bay but they traded in other goods as well, as the advertisement below (second image, 1889) shows. The Mossel Bay shop was taken over by C W Black in 1896 (Divine Hall & Company had branches in Oudtshoorn, George and Ladismith as well). The corner then became known generally as Black’s Corner (third image). C W Black, however, encouraged people in his advertisements to “Go to the Old Corner / Hou U Bij Den Ouden Hoek.” The corner also had a reputation as the most dangerous street corner in Mossel Bay. All traffic in the direction of George had to pass it and a number of fatal accidents occurred over the years when speeding ox wagons and horse-drawn vehicles coming down Church Street could not negotiate the corner and overturned, or crashed into the building. The old building eventually made way for the present building (fourth image) 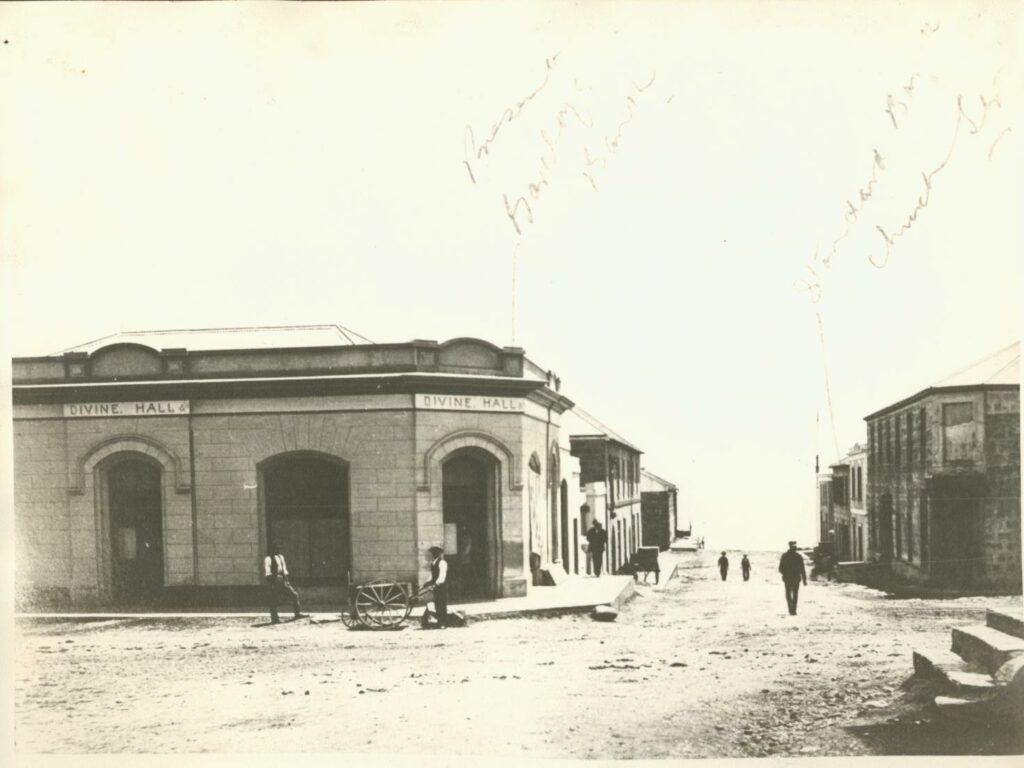 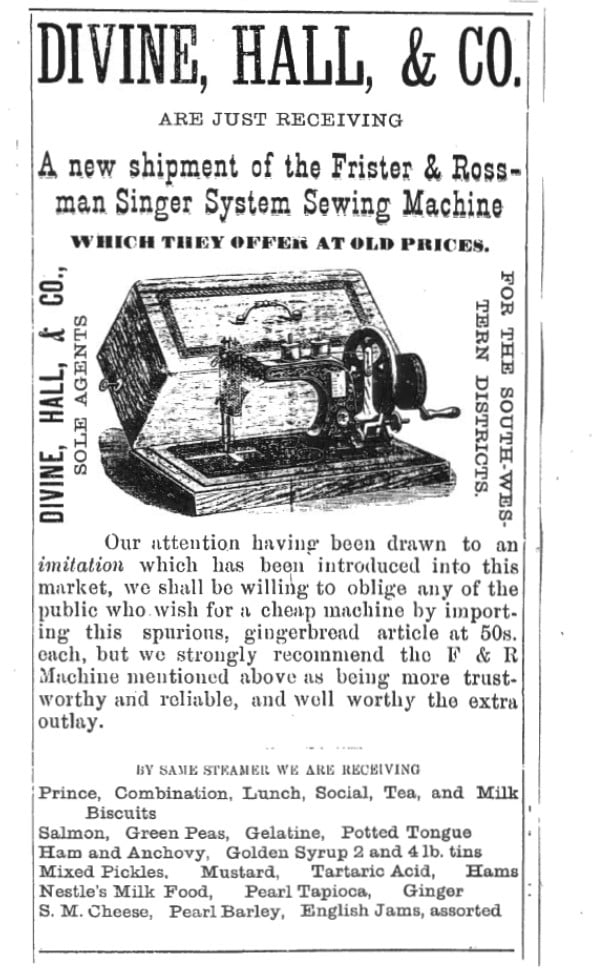 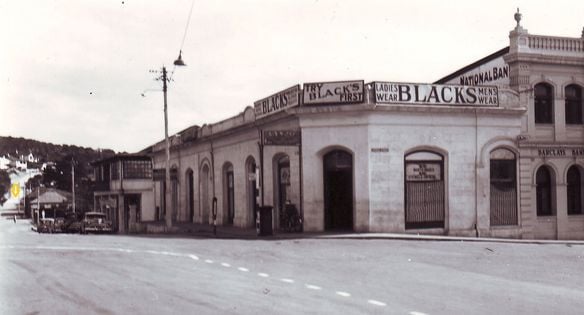 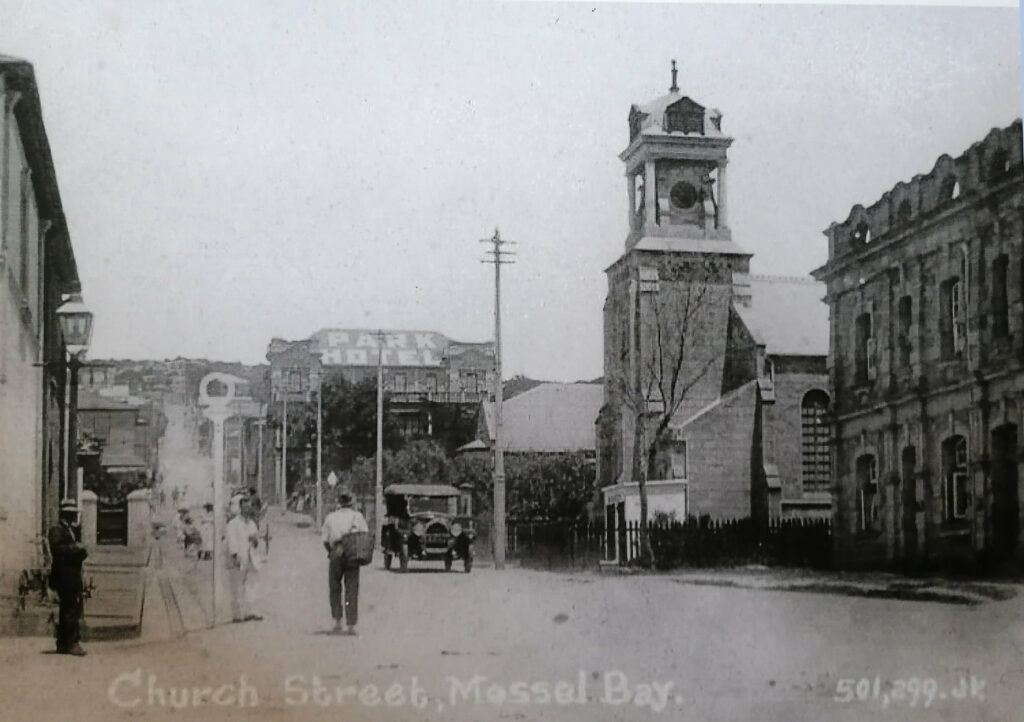 The photograph above show Church Street. Judged by the model of the car, the first photograph is of Church Street circa 1920. The first building on the left, on the corner of Bland Street and Church Street, is the Vintcent building (c 1824, enlarged c 1855, c 1880). The recognisable buildings on the right are the Dutch Reformed Chambers (1914, demolished c 1949 / topic of last week’s post), the Dutch Reformed Church (1880), the Sir Herbert Baker-designed library (1894, demolished in 1965) on the corner of Marsh and Church Street and the Park Hotel (c 1905 – 1910, demolished c 1968 – 1970) on the opposite corner to the library. The second photograph is the present view of Church Street in the same direction. The brick-coloured building above the church is Montagu Place In Montagu Street. It accommodates the Mossel Bay municipality’s Town Planning Department as well as several businesses.